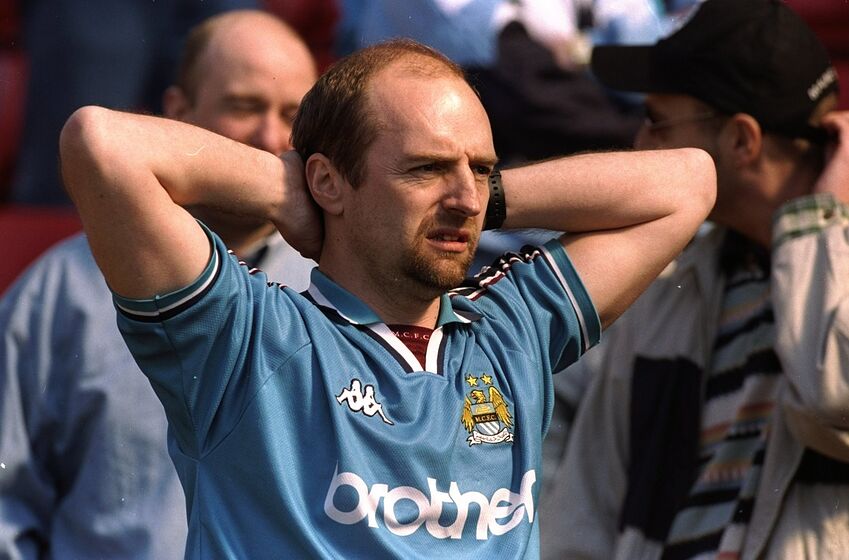 3 May 1998: A Manchester City fan is in despair at their relegation to Division Two despite winning in the Nationwide Division One match against Stoke City at the Britannia Stadium in Stoke-on-Trent, England. Manchester City won the match 5-2. Mandatory Credit: Alex Livesey/Allsport

When looking round at the Etihad Stadium and City Football Academy it is hard to imagine that 21 Years ago today – on 3 May 1998 Manchester City were relegated to the Third Tier of English Football for the first time in their history.

There are all kinds of books which have been written about how people can successfully deal with adversity yet the surprise is none have interviewed Manchester City fans when researching these texts. Being a supporter is often a complex and testing relationship – and this is especially true when faced with performances which are on the whole not worthy of supporting. Relationships are tested, the depth of fanaticism is explored and it gets harder with each passing match to justify the financial costs.

Whilst the phenomenal growth of City in recent years – to the point where we are being considered the most valuable Club in the Premier League – has attracted many new fans we should all take a moment to applaud those fans of old who remarkably stuck with the Blues in the face of considerable adversity. That tenacious loyalty helped inspire the comeback and ultimate resurrection of Manchester City.

On 3 May 1998 City played Stoke City away from home in the last game of the season. There was still an outside chance City could avoid relegation by winning and hoping their rivals for the drop slipped up, although the die was probably irrevocably set when City lost their preceding game to QPR. City’s supporters had followed the Club in great numbers throughout what had proven to be a dire season.

Results had been poor despite some fairly significant squad investment – Lee Bradbury a £3 million signing from Portsmouth lead a considerable influx of players. But this was a large and inflated squad and the repeated poor showing on the pitch had already cost one manager -Frank Clarke – and Club Chairman their jobs. Joe Royle had been brought in to steady the ship and whilst there was an initial upturn, results dipped again.

The crowd at this last game of the season was 26664 and there were Manchester City fans throughout the ground – bolstering Stoke’s usual 12000 attendance considerably. The supporters got to see the Blues do their bit and run out 5:2 winners. Goals were scored by Paul Dickov, Lee Bradbury, Kevin Horlock and two from Shaun Goater but the victory was to no avail. Results elsewhere conspired against us and City were relegated to their lowest tier of League football.

The freefall continued into the following season too, as Manchester City famously lost to York City away on 12 December 1998 leaving them in their lowest League position of all time -12th in the Third Tier! Of course City clambered back from this position and eventually won promotion via the play offs, but that is another story!

Next: Manchester City : The Calm Before The Storm

Beating Stoke City on 3 May 1998 and still being relegated (along with Stoke) was the lowest point in my time as a supporter. The journey from there to achieving 192 points in two Premier League seasons under Pep Guardiola seems absurd. Yet this is an important part of our history, as important as any title victory. Manchester City may be 125 years old this year but we were really only fully formed in adversity.

The important thing about facing adversity is how you deal with it. Being there when we were rubbish is not that important to our current Manchester City side but the humility we learnt when dealing with those experiences is what sets us apart from other “big” clubs. That is the abiding message for all the wonderful new fans who have joined us along the way.